Phi 1.618 tells the story of a new nation of eternal, biologically perfect humans, the Bio-Titans, who are preparing to leave Earth forever, onboard the ship Whirligig for its mission. In this utopian reality, protagonists Gargara and Krypton will attempt to fight the foretold outcome and turn history around. They will go through various adventures in a constant race against time and in the eternal battle between love and evil, humanity and unscrupulousness.

The two leading roles are entrusted to the actor Deyan Donkov /Footsteps in the Sand, If Someone Loves You, I Am You, Karatsi, etc. / who will play the returning to human form Krypton and the young actress Martina Apostolova/ with international recognition for her role in the film Irina and the European Rising Star award at the Berlinale 2020/ who will play his guide to the truth – the wise and courageous Gargara.

Behind the camera is one of the most talented Bulgarian cinematographers – Emil Hristov, who has worked on dozens of documentaries and feature films. The production designer is Sabina Hristova and the costumes are by Velika Prakhova. The screenwriter of the film is Vladislav Todorov, the author of the novel Pumpal, who is also the producer, together with Orlin Ruevski. 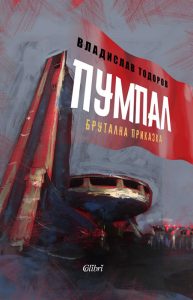 “Whirligig” (written by Vladislav Todorov) is a brutal tale, in which funny things hamper the terrible ones, the irony spoils the magic, the absurd acquires iron logic, and the language commits outrages against the miracle of the creation called man. The action throws us indiscriminately into the unknown future, within the limits of human history, where the happy ending lies in the womb of darkness. 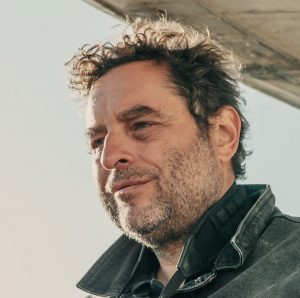 He was born on February 4, 1968. In Bulgaria he initially became famous mainly for his remarkable theatre posters of the 1990s. He currently lives in Montreal, Canada, where he creates his films in collaboration with the National Film Board of Canada. Since 2010, he has taught and conducted workshops and masterclasses at more than 20 universities and festivals around the world, including Japan, France, Spain, Germany, Portugal, London, Budapest, and many others.

Ushev’s impressive and distinctive works have won over 80 awards and accolades and have been screened in many retrospectives, including the Clermont-Ferrand Short Film Festival in France. In 2013, in her official opening address, French Minister of Culture Aurelie Filippetti said, “Clermont, this is resistance. These words by Theodore Ushev, author of the incredible 2013 poster, set the tone for the 35th edition of the Clermont-Ferrand Short Film Festival.”

Among his most popular works are undoubtedly the visual masterpieces “Blind Vaisha” and “The Physics of Sorrow”.

“Blind Vaisha is based on the short story of the same name by Georgi Gospodinov. The film has won 6 awards at international film festivals (including Best Short Film at Chicago and Ottawa; Jury Prize at Annecy) and 4 Best Short Film nominations, including a nomination at Berlinale and an Academy Award.

“The Physics of Sadness won a total of 14 awards and 12 nominations from international festivals, including Best Short Film from the Annecy International Animated Film Festival. The work was also shortlisted for an Academy Award.

His animated works, including the short films Tower Bawher (2005), set to music of Georgy Sviridov, the children’s Tzaritza (2006), and The Man Who Waited (2006), based on Kafka’s text, have won numerous awards worldwide.

In 2014. The Canadian Film Institute published a book on Ushev’s work. The book is titled Dark Mirror: The Films of Theodore Ushev and is edited by Tom McSorley, Executive Director of the Institute.

Phi1.618 is Theodore Ushev’s first feature-length film and another pinnacle in the world of cinema that he will conquer. Once again inspired by a literary work (Whirligig by Vladislav Todorov), the film will transport viewers into the mysterious world of perfect humans – bio-titans.

Bio-titan and secret crypto-calligrapher
For a hundred years he has lived aboard the Whirligig.
He is thirty-three years old. He’s always been that age.
And will continue to be.

Krypton’s Sleeping Beauty.
For a hundred years she has kept him company.
Minimally alive, maximally silent, and still human.

She knows that every poison has its antidote.
Possesses the tear that can awaken the princess.
Corporeal.